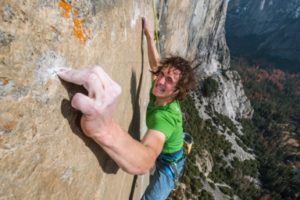 No wall seems to be too flat, no overhang impossible: 24-year-old professional rock-climber Adam Ondra from the Czech Republic is one of the world’s best climbers. He is the first person who has ever climbed a 9b+ route, the hardest grade a climbing route has ever been designated. Until now:

Adam Ondra is currently in Flatanger, Norway, working on his new project, Project Hard, the world’s first 9c route. „If you take one of the most difficult boulder problems, which you would usually do just above the ground, and take it to the middle of a cave, that’s Project Hard“, says Ondra.

Bouldering is a form of rock climbing, which climbers perform without the use of ropes or harnesses. „One challenge of Project Hard is that this hard section is in the middle of the route“, says Ondra. „Before I reach the hard sequence, I have to climb a relatively easy part, which tires my muscles. And then again, after the hard sequence, the route is still not finished.“

To be the first person to successfully climb a 9c route Ondra has to make a successful redpoint. Redpoint means the climber climbs from the bottom of the route to the top without falling. Therefore, before attempting a redpoint, Ondra climbs the different sections of the route individually. Sometimes he ends up days, weeks or even months just practicing the moves and working on the route bit by bit.

„There is one incredibly complex section in Project Hard and at the beginning it was almost like solving a puzzle“, says Ondra, „it was very exciting to find the right foot holes and hand holes and to figure out my way through the sequence.“ Even more exciting and challenging for Ondra is the fact that this sequence is an almost completely horizontal route and sometimes, he has to climb with his feet first. 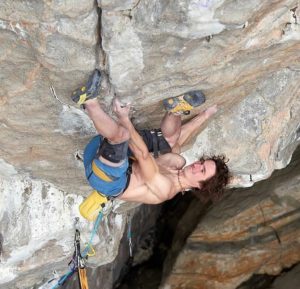 Finger Strength is fundamental
Climbing a horizontal route requires amongst other things a lot of body tension. „The most important training for body tension is climbing itself“, says Ondra. Climbing alone takes up 60 per cent of his training. The other 40 per cent consist of general fitness training, for example with the TRX Suspension Trainer.

Besides training on the TRX, Ondra also uses a campus board, which can be described as a gym for climbers. A campus board is a training tool: A series of horizontal rungs are attached to an overhanging surface and the climber trains by climbing up and down these rungs without using his feet. 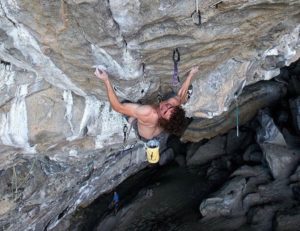 To be 100 per cent focused when climbing on the Project Hard, Ondra also does mental training. „I think about the moves all the time, which can be stressful.“ Stressful, because when thinking about the moves Ondra also considers what could go wrong during every move. „I know this move is a problem, because I can make this mistake. And that move is a problem because my foot can slip and I have to be really precise with the handholds there.“

„Doing such a project takes a lot of optimism and patience“, says Ondra. There can be good days, but also bad days, depending on the weather or his physical shape and mental condition. „Or I could just be doing something wrong, like placing my foot one millimetre too far left and then I keep falling until I realize my mistake. This can take days or even weeks, but it’s part of the game and it’s exciting.“

Living the dream
Climbing is obviously Adam Ondra’s passion. The 24-year-old Czech started climbing when he was six years old, then dreaming of the life he is living now. Having finished his bachelor studies in economics and business management, Ondra is now taking some years off to focus on climbing outdoor.

„Right now, I am definitely living my dream“, he says. For him, climbing is more of a lifestyle than just a sport. Or a sport, which brings a whole package with it. „I like the creativity of finding my way on the rock when there are just so many holes and you have to decide which hole is going to work the best. In general, I just love to be high above the ground and feeling the wind. I love to travel, I love to see new places and sometimes, climbing brought me to places which I definitely would have never visited otherwise.“ 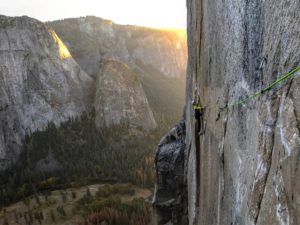 Now, Adam Ondra is focused on his Project Hard, the world’s first 9c route. After having to go easy on climbing due to a cold, he is now back on the rock and – when the weather is bad – on a climbing wall which he and his team built inside a barn. Training, to be the first climber to ever to conquer a 9c route in one go.